Like many endometriosis sufferers, conceiving naturally was a huge surprise to myself and my partner after being told by a number of different gynaecologists to begin trying a year or two before wanting kids due to possibly needing to go down the IVF path.  One doctor even told us just to continue having LOTS of sex (not that my partner was complaining).

While I had terrible morning sickness and the usual aches and pains during pregnancy, I could not complain, and I couldn't wait to hold our little baby once she arrived.  At one of our early scans, the technician picked up that our daughter had a congenital heart defect. All of our genetic tests came back as low risk, but we still felt a lot of pressure from a few doctors to have an amniocentesis, and there was even discussion about termination as the baby could have other genetic problems. We went with our gut and decided to proceed with the pregnancy as we felt whatever life had to throw at us and our baby, we could cope with it.

We had a number of follow up appointments with a fetal cardiologist throughout my pregnancy, who to me, was the reassurance we needed. He remained positive and upbeat about our daughter's condition and that she could live a normal life; however, we may have to give up the dream of our daughter being a professional athlete (we could live with this).  Due to being let down a lot throughout the course of my life by traditional medicine, my birth plan was to go as natural as possible as long as it was safe for myself and bub.

We began labour preparation with my acupuncturists four weeks before my due date focusing on preparing the cervix and teaching my partner pressure points to use during birth. Leading into 40 weeks, it was decided by my medical team that if I didn't go into labour naturally by 40 + 2, I would need to be induced due to some of my health complications (autoimmune disease).  While this wasn't my ideal plan, I knew they were doing what was best.

At 40 weeks, I had a stretch and sweep completed by the hospital as well as a "natural induction" completed by my acupuncturist. I was already a few cm's dilated at this stage. At 40+1, I didn't feel any different and had come to terms that this baby would be induced the following day at 9 am.

At 2 am on the day I was 40 + 2, and due to be induced, I woke up with intense cramps and as soon as I stood up, my waters broke. My contractions were instant and every 2-3 minutes straight away. The hospital advised me to come in. I was already 6cms dilated and moving fast.  Due to the limited time I was having between contractions, I opted to try the gas, which helped keep the edge off.

Due to my daughter's heart condition, I did have to have her heart monitored the whole time. I progressed fast to 9cm dilated, and then my cervix decided that was it for a few hours and didn't want to dilate any further. After a few hours, we were finally at 10cms and ready to push!  And then my contractions stopped... my daughter decided that was enough, and she wanted to stay inside and not meet her parents. The nurse gave me oxytocin which only helped mildly.

My daughter's heart rate dropped, and the nurse pressed the big "panic" button.  To an exhausted mother in labour, it seemed that half the hospital was in my birthing suite, ready to help. Her heart rate came back to normal, but I had almost been actively pushing for 2 hours. The doctors advised that my daughter's head was angling down into my hip and not the birth canal. They said I could have two more unassisted pushes before they intervened. No dice. I was exhausted and hysterically crying, not just because of pain but just because I felt defeated by my own body.

I ended up with an episiotomy, and my daughter was delivered by vacuum at 1.32 pm the same day I went into labour, just shy of 12 hours from start to finish.

When my daughter was born, we did immediate skin to skin, and she took to breastfeeding like a pro - and at that moment, it was all worth it.

While I was so wrapped up with the delivery, I wasn't aware that I had lost 1.5 litres of blood and began to feel quite weak quite quickly. They began to weigh all the blood and muck that came out right in front of me, which I thought was a bit much for someone who had just given birth.  They also checked my placenta, which had a large hole in it (I didn't take much notice of this at the time, but this soon became an issue). Due to my blood loss, my daughter's heart condition and some jaundice, we ended up staying in hospital for three days and were more than ready to head home when we could.

Everyone talks about the afterbirth glow and fuzzy feelings. While I was absolutely in love with our daughter, I felt off from birth. I had a heavy and uncomfortable feeling and was still losing a large amount of blood. I put this down to my blood loss and kept pushing on. Now that I do think back on it, I was brushed off a little bit in my checkups and made to feel that my concerns were not valid, and it was normal to feel this way after birth.

Two weeks post-partrum, I was doing a late-night feed, and I felt like I had wee'd myself. I had a very heavy bleed and passed something the size of a 50 cent coin - my blood went cold, and I called the hospital straight away. I was told that it "could" be normal and to see my GP when I could... I went to sleep following my medical advice and called my GP first thing in the morning. He sent me for an immediate ultrasound, which resulted in him sending me immediately to the emergency department due to the large amount of placenta that still remained inside of me. He had already called ahead and spoken with the head of gynaecology and was told to prepare for surgery.

When I got to the hospital, I spent hours waiting and waiting to be sent home and told to come back if I felt worse. That night I woke up in the middle of the night in a pool of blood and passed tissue the size of an orange. We went immediately to the hospital.

I would never hope any individual has to go through this feeling - brand new baby that you are trying to connect with, but in the back of your mind, you are trying not to think of the worst-case scenario.  I ended up having a d&c surgery and spending some time recovering in hospital. I was lucky that I got my own room so I could continue to look after my daughter and establish breastfeeding. I also feel let down by the hospital as I had only been sent home earlier that day.

Could all of this trauma have been avoided?

I didn't have the 4th trimester that you dream of. But I got my dream. I have the most amazing daughter. All I can say is that you have to trust your gut and if you don't feel validated, get a second opinion.  After a follow-up, I was told that I was extremely lucky that I didn't bleed out. I have also been told that there is a large change in my endometriosis that caused my placenta to remain and that in any future births, I have a very high chance of this repeating. 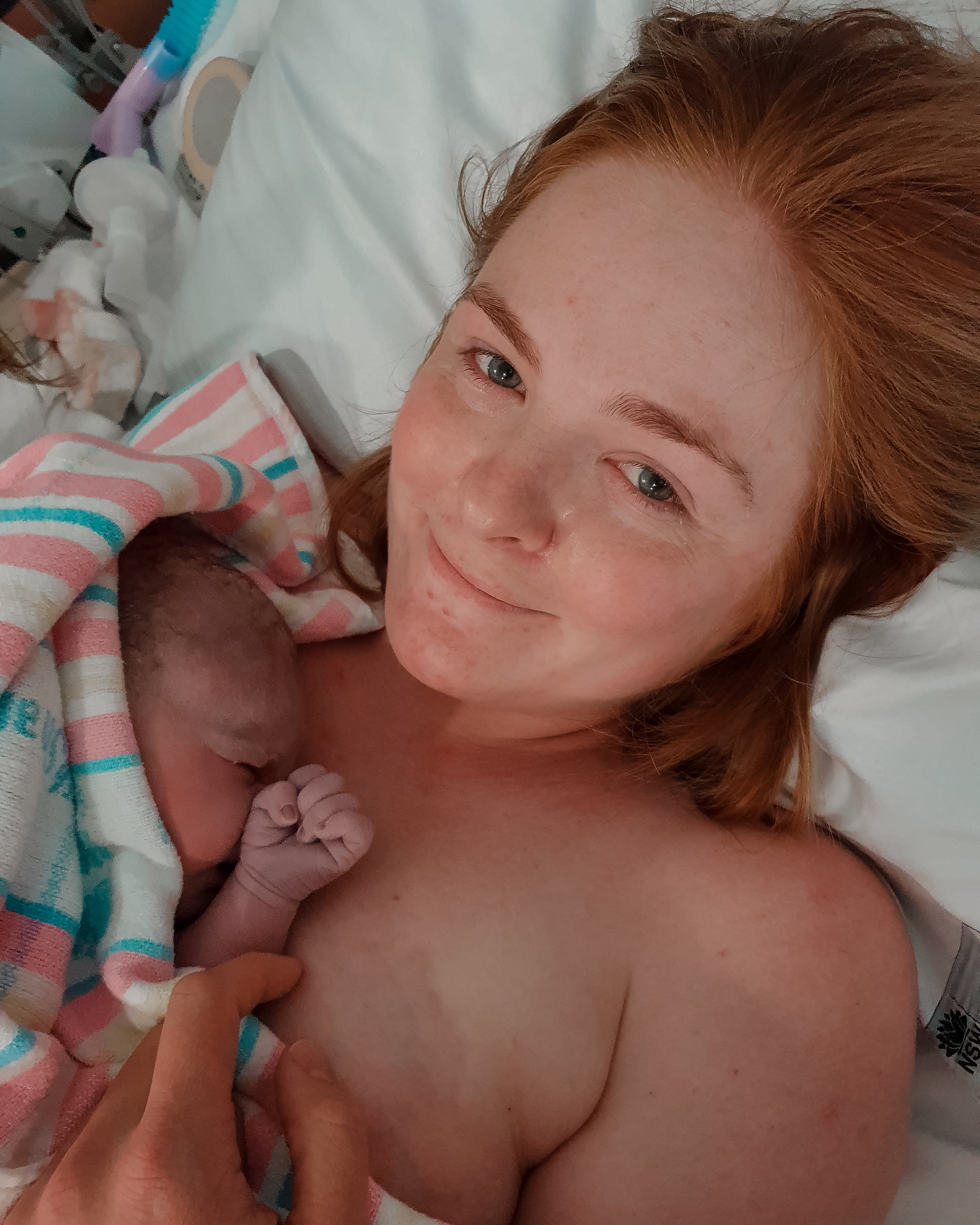